A new look for Raymond Khoury 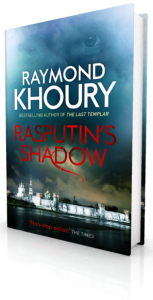 Two years after we designed his website for the first time, we’re pleased to report a new look for New York Times-bestselling author Raymond Khoury’s website. The site goes live in the run-up to the US release of Raymond’s sixth novel, Rasputin’s Shadow:

On a cold, bleak day in 1916, a mining pit in Siberia turns into a bloodbath when its miners attack each other, savagely and ferociously. Minutes later, two men – a horrified scientist and Grigory Rasputin, trusted confidant of the tsar – hit a detonator, blowing up the mine to conceal all evidence of the carnage. In the present day, FBI agent Sean Reilly is tasked with a new, disturbing case. A Russian embassy attaché seems to have committed suicide by jumping out of a fourth-floor window in Queens. The apartment’s owners, a retired high school teacher and his wife, have gone missing, while a faceless killer is roaming New York City, leaving a trail of death in his wake. Joined by Russian FSB agent Larisa Tchoumitcheva, Reilly’s investigation into the old man’s identity will uncover a deadly search for a mysterious device whose origins reach back in time to the darkest days of the Cold War and to Imperial Russia and which, in the wrong hands, could have a devastating impact on the modern world.

The new site uses IP address detection to show US-based visitors the US jackets while those outside the US see the UK versions, making it more likely that Raymond’s many fans will see the covers they can relate to, and Typekit fonts to show crisp and exciting typography to users which is still completely accessible, search-engine friendly and easy for Raymond to change himself.