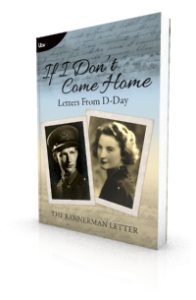 This documentary, broadcast at 10:35 on 5th June, commemorates the events on the 6th of June 1944, the largest amphibious military assault in history, when Allied troops invaded the Normandy coast of Nazi-occupied France. It was the beginning of the end of the war in Europe, and by late August all of northern France had been liberated. More than 156,000 British, American and Canadian troops took part. Everyone involved in the invasion knew there was a chance they would not make it home alive; it was a truth that was hard to confront and a fear that was hard to express. On the eve of invasion, the troops were able to send a letter home to their loved ones, and for many, this would be their last letter home.

Published to accompany the drama-documentary of the same name,If I Don’t Come Home contains the complete diary of Alastair Bannerman, whose story is featured in the programme. Bannerman took part in the D-Day invasion of the 6 June 1944, and was taken prisoner-of-war and reported as ‘missing in action’. His diary, an extended love-letter to his wife, was confiscated by the German army, and by a series of miraculous coincidences, returned to him in a German translation, many years after the war. This book, with a Foreword and Afterword by Alastair’s three sons, contains that diary in its entirety, returned to its original language.

The book, which is ITV’s first e-book publishing project, was typeset by Bookswarm using the PressBooks platform, and we also designed the cover, as well as organising print-on-demand copies for promotional purposes. If I Don’t Come Home will be available from all leading e-book retailers, including Amazon.