Q: Where does Napoleon keep his armies? 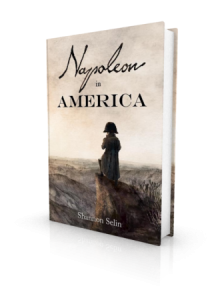 A: Up his sleevies!

They say the old ones are the best. That may be debatable, but that particular old joke was the first time anyone ever mentioned Napoleon to Simon as a child, so he was determined we should get it in somewhere. And now, in the same year that we have designed a website around his rival Wellington, Bookswarm has built a website for Canadian historical novelist Shannon Selin, whose first book, coming out in 2014, is built around imagining what might have happened if Napoleon Bonaparte had escaped from St. Helena and wound up in the United States.

The year is 1821. Former French Emperor Napoleon has been imprisoned on a dark wart in the Atlantic since his defeat at Waterloo in 1815. Rescued in a state of near-death by Gulf pirate Jean Laffite, Napoleon lands in New Orleans, where he struggles to regain his health aided by voodoo priestess Marie Laveau. Opponents of the Bourbon regime expect him to reconquer France. French Canadians beg him to seize Canada from Britain. American adventurers urge him to steal Texas from Mexico. His brother Joseph pleads with him to settle peacefully in New Jersey. As Napoleon restlessly explores his new land, he frets about his legacy. He fears for the future of his ten-year-old son, trapped in the velvet fetters of the Austrian court. While the British, French and American governments follow his activities with growing alarm, remnants of the Grande Armée flock to him with growing anticipation. Are Napoleon’s intentions as peaceful as he says they are? If not, does he still have the qualities necessary to lead a winning campaign?

We have also created a logo for Shannon to use both on her business cards and on the books themselves.

The website is responsive (it changes layout to optimise itself for different mobile devices and tablet computers) and completely organised around Shannon’s books, stories and in-depth research about one of the most remarkable characters in the history of Europe.

Of her experience working with Bookswarm, Shannon said:

Simon Appleby and the Bookswarm team immediately understood what I was looking for in an author website, and came up with a design and functionality that fully meets my needs. Simon is a delight to work with – smart, knowledgeable, excellent at explaining technical details in plain English, and full of good ideas. By the 24/7 speed with which he responds to requests, I am wondering when he finds time to sleep. I am so glad I hired Bookswarm.

So you don’t have to see us actually blushing, go and visit Shannon’s new site.